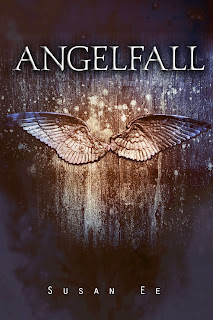 It's been six weeks since angels of the apocalypse descended to demolish the modern world. Street gangs rule the day while fear and superstition rule the night. When warrior angels fly away with a helpless little girl, her seventeen-year-old sister Penryn will do anything to get her back.

Anything, including making a deal with an enemy angel.

Raffe is a warrior who lies broken and wingless on the street. After eons of fighting his own battles, he finds himself being rescued from a desperate situation by a half-starved teenage girl.

Traveling through a dark and twisted Northern California, they have only each other to rely on for survival. Together, they journey toward the angels' stronghold in San Francisco where she'll risk everything to rescue her sister and he'll put himself at the mercy of his greatest enemies for the chance to be made whole again. 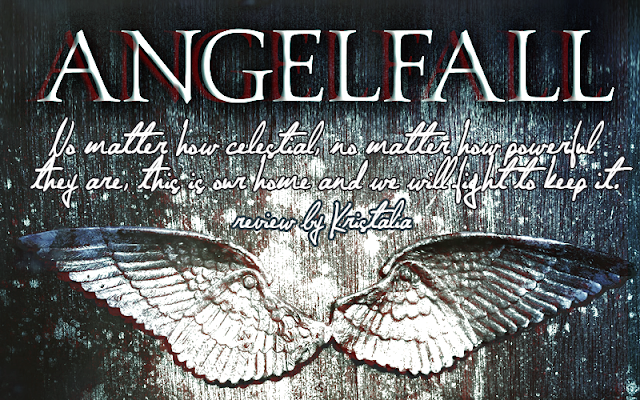 “Sometimes, as we're stumbling along in the dark, we hit something good.”


And sometimes, we stumble upon a book like this: fantastic book that is unlike the others. Oh that is such a cheesy line - i sometimes really dont know how to begin writing reviews oh my angels.

I read this book 2 times so far, first time was in february,2012th, and i was waiting for so long for the sequel to come out. Alas, when the day finally came, and the sequel was out, i found out something horrible - i remembered the key points but not the details (brain, how could you fail me so?)

The point is - i really love this book - the first time i read it i was really shaken up and i couldn't stop talking about it. And reading it for the second time made me realize that i didn't stop loving the book (minus the fact that i knew everything that will happen...).

It's full of action, sassiness, sarcastic moments and interesting dialogies as well as interesting story and movie like writing (which was really well done). It's just hard to put this book down... (oh and just FYI, i think i saw this being made into a movie - they can pull it off very good if they try to)...

The ending is the most surprising of the whole book - it is shocking, twisted and dark - and that is all you need to know.

The only thing though, that bothered me, was that the world of Angels was not explained - at all! We were given hints about their hierarchy but that was all... I really wish upcoming books explain their world building because this is what this story needs.

And what i really loved was that the book was more concentrated on the story than on romance that i had expected (since usually most of ya paranormal books end up being all romance and screw the story types).


In our future, apocalypse has begun the moment Angels came to Earth. And instead being peaceful, they almost destroyed the world: ravaged the cities and killed as many people as possible...

Six days after the apocalypse begun, Penryn Young found herself in the crossfire between angels. She didn't expect that angels would turn against one of their own and cut of his wings. Neither did she expect that her sister would be kidnapped because they witnessed this act...

Her only chance is to save and convince the wingless angel Raffe to help her find her sister and bring her back... but it may turn out harder than she thought.

Penryn Young is a human who lost her sister - she plans to bring her back no matter what the cost. Penryn's sister is kidnapped and she doesn't know how to save her. Until she sees the wingless angel and idea forms in her mind - if he helps her, she can save her sister... Except, it's not an easy task...


“I never thought about it before, but I'm proud to be human. We're ever so flawed. We're frail, confused, violent, and we struggle with so many issues. But all in all, I'm proud to be a Daughter of Man.”


-- Penryn is strong, brave and intelligent heroine. I cannot even begin to describe how much i enjoyed reading from her perspective - she was interesting and funny and just great.

“I never kid about my warrior demigod status."
"Oh. My. God." I lower my voice, having forgotten to whisper. "You are nothing but a bird with an attitude. Okay, so you have a few muscles, I’ll grant you that. But you know, a bird is nothing but a barely evolved lizard. That’s what you are.”

Raffe is a an angel who lost his wings - and he wants to be whole again. Surrounded by 5 angels he couldn't handle, he was overpowered... The conflict ended when those angels finally caught him and cut off his wings. And to make things worse, he ends up in hands of one really... edgy human who is quite desperate to get her sister back...

“Angels are violent creatures.”
“So I noticed. I used to think they were all sweet and kind.”
“Why would you think that? Even in your Bible, we’re harbingers of doom, willing and able to destroy entire cities. Just because we sometimes warned one or two of you beforehand doesn’t make us altruistic.”


-- Raffe was sarcastic,sassy, interesting and sometimes jerkish (not always though) kind of guy angel... I liked him, especially his sense of humor and his unability to comprehend what Penryn says sometimes - which lead to some interesting situation.

“So long as you don't bleed in the shape of wing joints, you should pass for human. Oh, and don't let anyone pick you up. They'll know you're not right as soon as they feel how light you are."
"I'll be sure not to let anyone but you carry me in her arms.”

One of the characters i didn't mention before is Penryn's mother,a really weird woman which is really hard to understand (being that she is probably bat-sh*t crazy). There were other characters but i really don't want to explain, except for the loco twins Dee-Dum, which were quite amazing and funny hahahaaa....

I cannot explain how much i love this book - even rereading it kept my attention from the beginning till the end. I loved the story, the characters, the twists - everything! I just hope sequel will be as good as Angelfall.