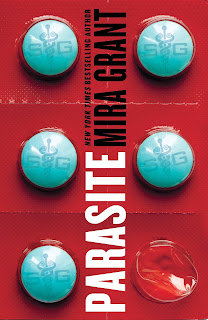 A decade in the future, humanity thrives in the absence of sickness and disease.

We owe our good health to a humble parasite - a genetically engineered tapeworm developed by the pioneering SymboGen Corporation. When implanted, the tapeworm protects us from illness, boosts our immune system - even secretes designer drugs.

It's been successful beyond the scientists' wildest dreams. Now, years on, almost every human being has a SymboGen tapeworm living within them.

But these parasites are getting restless. They want their own lives...and will do anything to get them. 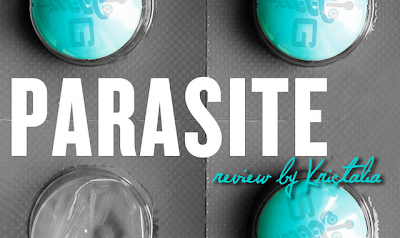 “No one wants to set out to be a hero, and discover that they've been a villain all along.”

Mira Grant is amazing woman & writer. First, she captured my attention with Newsflesh, the series worth all the hype - and also - it was a series that i will never forget and the one that i reread already. What i wanted to say, given how much i loved her previous series, i had high expectations of this series as well.

We all want things that can never happen, and even when we know they’re not going to become reality, we keep on wanting them.

First of all, this series has a really interesting (and really my-stomach-doesnt-like-this-so-much) idea, where every sickness was healed. It was promising and Mira Grant delivered it spectacularly - except for some really predictive moments which i saw coming from... the beginning actually (which is why i gave it 4.5 stars instead of 5, and also maybe because it wasn't as shocking as Newsflesh's Feed - which was SO DAMN SHOCKING IT HURT).

In 2027, medicine on Earth advanced on a level that healed humans of every sickness. So let me start from the begining. Once upon a time, there was a trio of scientist who wanted to change the world - so no one ever gets sick again. Their company was called SymboGen, and they developed a nice solution for all of their problems - a genetically modified parasite typeworm.

After the successful demonstration on Sally Mitchell, the girl who "died" because of brain damage, and who miraculously survived it - almost everyone decided to have the "Intestinal Bodyguard" implanted in them. But... they are not just parasites...

Sally Mitchell died in June, 2021 when she was 20 years old. She died the moment she ended in a car crash. But instead of being dead - she found herself pretty much alive. But there was something that went wrong: she ended up with amnesia, literally wiped out of all memories she had - how to be human, how to speak, to read. SymboGen's tapeworm,which was implanted in her before, healed her. Because it was unusual that she survived such a giant accident, SymboGen offered treatment, but also to do some "examination" when they needed too.

Six years later, Sally Mitchel is a completely different person than she was before: now she is calmer, nicer person and it confuses all who knew her before. But the fact is, she doesn't want her old memories back. Especially since she has a boyfriend who cares about her as she is now. But, living a new life is as a big challenge as is the fact that she may know what is happening, even though she is not yet aware of it.

-- Sally was really likeable character, i loved her curiosity, her thinking - i just liked her,okay?

Nathan Kim is a doctor, a parasitologist, who met Sally in a hospital. But despite being parasitologist, he refuses to have anything with parasite that SymboGen offers. He supports Sally and really loves her, and he tries to help her, in any way possible.

-- Not much is revealed about him at the moment, but knowing Mira Grant, she may put some chapters from his POV (*i pray for that to happen*). He is mysterious, but really lovely character and i really loved everytime he appeared in the book.

I really loved Tansy, of which i will not speak anything else, since it would be a spoiler, but i especially loved her crazyness and her sense of humor. Adam was interesting as well and i wish to learn more about him in the coming books. I don't know how i feel about Sally's parents but generally, i did not like them. Either they were too supportive or too controlling and i understand Sally and her decisions because of that. All in all, secondary characters were quite interesting.

It was hard getting into the story first, but i decided to push it on and see what will happen. Knowing Mira Grant because of her other books, this series may be quite unpredictable in the upcoming installments.

I really loved it and enjoyed it and i recommend it. Now, i shall painfully wait for other books to be published... *life is cruel mistress*


MY REVIEW ON GOODREADS